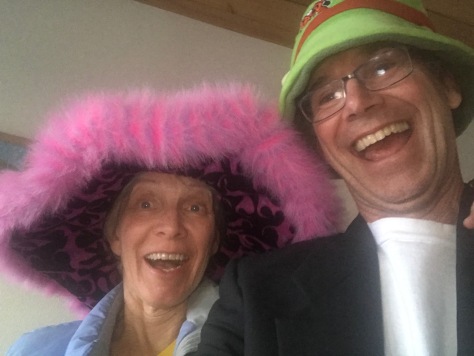 All this depends on how you define the words “Secret” and “Perfect.” Don’t let linguistic precision interfere with what your heart really wants. You’ve never considered these seven steps yourself, and I’m confident that doing this will help you feel blissfully perfect, albeit briefly, in our palpably imperfect world.

Step 1: Find your special magic hat. Wear your hat around the house or office for at least 10 minutes. Doing this will sync the hat with your brainwaves. Ideally, while wearing your special magic hat, you will read an article or two that includes statistical guidance on how to make great March Madness picks. Even if you don’t understand the articles, your magic hat will absorb the pertinent knowledge through a process that I’m not authorized to share.

Step 2: Find a friend or two who would like to participate with you. You may need to offer food, drinks, or money. Encourage them to wear their own special magic hat. Don’t let them wear yours. Everyone sometimes needs to set limits.

Step 3: Create a bunch of cards or slips of paper with the names of all 64 teams. Even though upsets are fun and feel good, honor reality by creating more slips of paper with the favored team names than the underdogs. For example, put in more little slips of paper with the name “Duke” than “Abilene Christian.” Also, when deciding who’s favored, go with the Vegas odds-makers. Unlike the NCAA selection committee, the Vegas odds-makers actually pay attention to which teams are better; in contrast, the NCAA committee, Ken Pomernutz, ESPN’s “Bogus Power Index” (BPI), Joe Lunaticardi, and other people interested in power, control, and attention, put more emphasis on who they thought was good before the season started, and who won games way back in November and December. Although their information might be helpful, it’s more outdated than Vegas.

Step 4: Take off your special magic hat. You might want to simultaneously bow and say your favorite Harry Potter incantation; or you can just blow on the hat like you might blow on dice. Belching on the hat will not help. Don’t do that. Don’t even think of doing that. Then, put all the small cards or slips of paper into the hat. This is a good time, if you haven’t already started, to have a drink of your favorite beverage . . . but not too many drinks of said beverage. Sit still for a few minutes with your hat filled with team names, your best friend(s) filled with joy and anticipation, your favorite glass or mug filled with your favorite beverage, and a blank copy of the March Madness brackets. This scene is essential for creating magic, miracles, madness, and the right moment. Believe me.

Step 5: Begin drawing team names out of the hat. Let’s say you shout out the words, “Mona Lisa!” and reach in and pick Cincinnati. If that happens, you write Cincinnati down as beating Iowa in the first round. You should feel good about that pick since Cincinnati will be playing Iowa in Columbus, Ohio . . . sort of like a Bearcat home game, which is why you should have more “Cincinnati’s” in the hat than “Iowas.” Feel that goodness, and then put the “Cincinnati” slip to the side. When (or if) you happen to pick Iowa later, just put it aside in a separate loser pile, because you won’t need it until you put all the slips back in the hat for selecting your next bracket. Now, suppose you pick Iona before you pick North Carolina. That’s okay. Write down Iona. You need to trust me, trust the process, and trust the magic. Just remember what happened to Virginia last year. If you knew these seven steps back then, you could have gotten that pick right and you’d already be living in paradise by now.

Step 6: Continue this process until you’ve selected all 32 first round winners. If you pick any additional Cincinnati slips (or more than one of any team), just put them aside. Then, after round one ends, put all the extra “winner” slips back into the hat to start round two, while keeping any the first round “loser” slips in a separate pile outside of the magic hat. Don’t let those losers touch the magic hat (until later). Losers don’t have any magic. Don’t be a loser.

Step 7: Use the same procedure to complete round two, the sweet sixteen, the elite eight, the final four, and the national championship. Get behind the process. Say nice things to the hat. Welcome and cheer whichever slips (teams) get picked. Feel free to trash talk with your friends. Soon, everyone will be jealous of you. Don’t let that go to your head. Remember that magic likes big, beautiful hearts, not big egos

If this procedure doesn’t work, clearly, you’ve done something wrong. Although I feel sad that you’re a loser who couldn’t even manage to get this magic hat thing right the first time, you shouldn’t feel bad. Also, do not contact me for a refund, especially since I just gave you the secrets of filling out a perfect March Madness bracket for free.

If you don’t get a perfect bracket this time, maybe you can fix your mistakes and do the Magic Hat procedure right next year.

Good luck with that.