Let’s start with a myth and a truth.

Myth: Rita bought me a pair of “Joker” pants (as in Batman). I think wearing them will make me funnier.

Truth: Wearing them makes me look funny, but they don’t actually make me funnier. 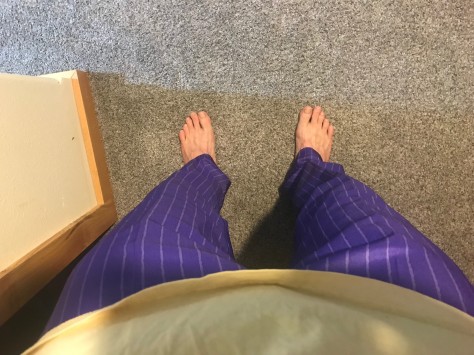 A myth is a traditional or popular story or legend used to explain current cultural beliefs and practices. This definition emphasizes the positive guidance that myths sometimes provide. For example, the Greek myth of Narcissus warns that excessive preoccupation with one’s own beauty can become dangerous. Whether or not someone named Narcissus ever existed is irrelevant; the story tells us that too much self-love can lead to our own downfall.

The word myth is also used to describe an unfounded idea, or false notion. Typically, the false notion gets spread around and, over time, becomes a generally accepted, but inaccurate, popular belief. One contemporary example is the statement, “Lightning never strikes the same place twice.” In fact, lightning can and does strike the same place twice (or more). During an electrical storm, standing on a spot where lightning has already struck, isn’t a good safety strategy. . . and wearing “Joker” pants won’t necessarily make you funnier.

The statement “We only use 10% of our brains” is another common myth. Although it’s likely that most of us can and should more fully engage our brains, scientific researchers (along with the Mythbusters television show) have shown that much more than 10% of our brains are active most of the time—and probably even when we’re sleeping.

False myths stick around for much longer than they should, sometimes they stick around despite truckloads of contradictory evidence. As humans, we like easy explanations, especially if we find them personally meaningful or affirming. Never mind if they’re accurate or true.

Not long ago I was discussing sex education with a group of teenagers. Several of them reported—with great confidence—that if a woman is on top during intercourse she can’t get pregnant.

Immediately, I tried to dispute their gravitational theory of birth control. To me, their belief in a birth control myth would likely lead to unhappy outcomes. But the teenagers held their ground.

Historically, myths were passed from individuals to groups and other individuals via word of mouth. Later, print media was used to more efficiently communicate ideas, both factual and mythical. Today we have the internet and instant mythical messaging.

Unfortunately, some myths are used for political or financial gain. Other myths, like the gravitational theory of birth control, lead to unplanned and adverse outcomes. Today, primarily through the internet, people are pummeled with information, misinformation, and outright lies. Despite amazing scientific, psychological, and technical progress, sorting fact from fiction remains an enormous challenge.

Suicide myths weren’t and aren’t designed to intentionally mislead; mostly (although there are some exceptions) they’re not about pushing a political agenda or selling specific products. Instead, suicide myths are the product of dedicated, well-intended people whose passion for suicide prevention sometimes outpaces their knowledge of suicide-related facts.

In some cases, people believe so hard in certain suicide myths that they cling to and defend their myths, even when the myths have become dysfunctional and even in the face of substantial contrary logical and empirical evidence. Thinking back to the teenagers and their gravitational theory of birth control, I recall their response to my scientific rebuttal. One of them said, “Well. Maybe so, but that’s what I heard, and it still makes sense to me. Even if sperm can swim uphill, gravity must make it harder to get a woman pregnant if she’s on top.”

When suicide (or birth control) myths take on a life of their own despite contradictory evidence, it’s usually because the myths have deep emotional roots or because people have an incentive that motivates them to hang on to their mythical beliefs.

Depending on your perspective, experiences, and your knowledge base, it’s possible that my list of suicide myths will push your emotional buttons. Maybe you were taught that “suicide is 100% preventable.” Or maybe you believe that suicidal thoughts or impulses are inherently signs of deviance or a mental disturbance. If so, as I argue against these myths, you might find yourself resisting my perspective. That’s perfectly fine. The ideas that I’m labeling as unhelpful myths have been floating around in the suicide prevention world for a long time; there’s likely emotional and motivational reasons for that. Also, I don’t expect you to immediately agree with everything in this book. However, I hope you’ll give me a chance to make the case against these myths, mostly because I believe that hanging onto them is unhelpful to suicide assessment and prevention efforts.

In this chapter, I list the four myths and provide brief descriptions. Read them, see what you think, and notice your reactions. In the next 4 chapters, we’ll dive deeper into evidence against these myths, why they’re potentially destructive, and alternative ways to think about suicide and suicide prevention.

Myth #1: Suicidal thoughts are about death and dying.

Most people assume that suicidal thoughts are about death and dying. It seems like a no-brainer: Someone has thoughts about death, therefore, the thoughts must be about death.

But the truth isn’t always how it appears from the surface. The human brain is complex. Thoughts about death may not be about death itself.

Truth #1: Among suicidologists and psychotherapists, the consensus is clear: suicidal thoughts and impulses are less about death and more about a natural human response to intense emotional and psychological distress. I use the term, excruciating distress to describe the intense emotional misery that nearly always accompanies the suicidal state of mind.

In elementary school in the 1960s, my reading almost exclusively included comics. I didn’t just love Captain America, I wanted to BE Captain America.

Unfortunately, I was in high school in the early 1970s, when reading books was apparently in disfavor. We used the SRA Laboratory Reading System and the only real “book” I recall reading in all of high school was “The Andromeda Strain.” Of course, the problem was likely partly due to my preoccupation with athletics over academics, but that’s a different story.

What this means is that most of my book reading has occurred after 1975, which is when my football buddy Barry and I read, “Real Men Don’t Eat Quiche.” The problem with that was that I happened to like quiche . . . a lot . . . and consequently, rather than questioning my sexual identity, I began questioning what society tells real men that they should do and not do.

This leads me to my book pick of the week.

As some of you already know, I’m working on a writing project related to sexual development in young males. This work led me to discover the book “Delusions of Gender” by Cordelia Fine, Ph.D. Dr. Fine is a psychologist in Australia and has written an absolutely awesome book that slices through many of the silly connections people are making between neuroscience and gender. For example, as an opening to chapter 14 “Brain Scams,” she wrote:

“My husband would probably like you to know that, for the sake of my research for this chapter, he has had to put up with an awful lot of contemptuous snorting. For several weeks, our normally quiet hour of reading in bed before lights out became more like dinnertime in the pigsty as I worked my way through popular books about gender difference. As the result of my research, I have come up with four basic pieces of advice for anyone considering incorporating neuroscientific findings into a popular book or article about gender” (p. 155).

You’re probably wondering, what is her excellent advice for those of us considering writing in this area? Well, I’m resisting the temptation within my male brain to type out her advice, other than her fourth piece of advice, which reads: “Don’t make stuff up.”

But that’s exactly what many writers are doing. Here’s an example I found recently. It’s titled, “7 things he’ll never tell you” and written by “Dr.” Kevin Leman. He wrote, “Did you know that scientific studies prove why a woman tends to be more ‘relational” than her male counter part? A woman actually has more connecting fibers than a man does between the verbal and the emotional side of her brain. That means a woman’s feelings and thoughts zip along quickly, like they’re on an expressway, but a man’s tend to poke slowly as if he’s walking and dragging his feet on a dirt road.” (pp. 5-6).

Or as I might say: He’s really just talking about himself here . . . and it’s likely caused by the fact that he didn’t eat enough quiche growing up.

So what’s the evidence? If we look at one of the best relational factors upon which women are supposed to be better than men–empathy–what does the research say?

Well, as it turns out, using the best and most rigorous laboratory empathy measure available, empathy researcher William Ickes found no differences between males and females in seven consecutive studies. And then, when he did find differences, he found women did better only in situations where they are primed by “situational cues that remind them that they, as women, are expected to excel at empathy-related tasks.” (Fine, p. 21).

Anyway, it’s late and I’m going to stop writing . . . but not before I put in a link to a Cordelia Fine speech you can watch online. Here it is:  http://fora.tv/2010/10/02/Cordelia_Fine_Delusions_of_Gender

Now I’m off to bake myself a quiche.