Publishing a piece in Slate Magazine was fun and interesting. The editor did a nice job reining me in and trimming the piece to an appropriate length. However, for anyone interested in the long-winded JSF version of the article, here it is. As you’ll notice, I included the examples of Trump’s behavior that fit the Millon personality descriptors.

My dad helped inspire the Slate article with his clear and concise comments about DJT’s “con man” skills. Here’s a picture of us when we were NOT talking about DJT. 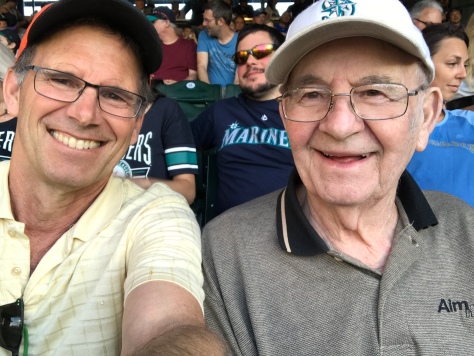 Preparing for and Containing a Trumpian Endgame

Pundits and professionals regularly express concerns about Donald Trump’s mental health. Most speculations focus on Narcissistic Personality Disorder (NPD). It’s easy to see why. If you look at the DSM-5 criteria for NPD, Trump’s public behaviors are obviously consistent with all nine diagnostic criteria. Even further, because only five of nine criteria are needed for an NPD diagnosis, Trump getting nine of nine is huge; perhaps no one has ever seen a narcissism quite so beautiful. Nevertheless, we still can’t diagnose Trump with NPD. That’s because it’s unethical to diagnose anyone without first conducting a professional evaluation. Also, Trump doesn’t meet the distress or impairment criteria required for a mental disorder diagnosis.

As disturbing as observations of Trump’s narcissism may be, what’s frightening about his personality isn’t narcissism. Narcissistic traits among politicians and presidential candidates—who often have big personalities—are common. Far more worrisome and dangerous is that his statements and behaviors fit so well with a different personality style. This style is what the renowned psychologist, Theodore Millon, called “The Aggrandizing-Devious-Antisocial Personality” (aka antisocial personality).

Millon summarized these personalities as “driven by a need to . . . achieve superiority.” They act “to counter expectation of derogation and disloyalty at the hands of others,” and do this by “actively engaging in clever, duplicitous, or illegal behaviors in which they seek to exploit others for self-gain.” Sound familiar?

What follows are summary descriptions of Millon’s antisocial personality style. Keep in mind that Millon’s statements are not diagnostic criteria for a mental disorder. The purpose here is not psychiatric diagnosis. Instead, my goal is to describe Trump’s personality, speculate on his future behaviors, and discuss strategies for how antisocial behaviors can be contained. To invoke a cliché, knowledge confers power; the more we understand Trump’s personality, the better prepared we can be for the directions his behaviors may take us.

Reading this, you may immediately think of Trump’s impetuous meetings with Kim Jong Un and Vladimir Putin, his sudden decision to impose international tariffs, or a different example. Whatever the case, it’s easy to spot incautious patterns in Trump’s behavioral repertoire. Now, and going forward, Trump needs continuous supervision and monitoring. This is especially the case when he meets with authoritarian leaders. Millon further described this impulsive style, “There is a tendency to jump from one exciting and momentarily gratifying escapade to another, with little or no care for potentially detrimental consequences.” Trump will probably need a clean-up team to finish his work or conduct damage control following his various escapades.

Blaming Others for Shirked Obligations. Antisocial personalities “frequently fail to meet or intentionally negate obligations of a marital, parental, employment, or financial nature.” When negative outcomes arise, Trump will be inclined to blame external forces or subordinates. This is the equivalent of a personal philosophy in direct opposition to President Harry Truman’s, “The buck stops here.” Holding Trump responsible for his behaviors has been, is, and will be extremely challenging.

Pathological Lying. Millon wrote, “Untroubled by guilt and loyalty, they develop a talent for pathological lying. Unconstrained by honesty and truth, they weave impressive talks of competency and reliability. Many . . . become skillful swindlers and imposters.”

Trump’s disregard for truth and fact is already legendary, with over 4,200 Trump lies since his inauguration. Millon also noted that antisocial personalities “play their games of deception with considerable skill” and “experience a degree of pleasure” from their deceptions, gaining “special joy in . . . taking from others.” These descriptions underline the need for the press and Congress to continually monitor and report the accuracy of Trump’s statements.

Declarations of Innocence. During times of trouble, antisocial personality types employ an innocence strategy. “When . . . caught in obvious and repeated lies and dishonesties, many will affect an air of total innocence, claiming without a trace of shame that they have been unfairly accused.”

Trump has repeatedly proclaimed his innocence, calling the Mueller investigation a “witch hunt” and frequently tweeting, “No collusion!” As he feels increasingly threatened, Trump’s claims of innocence will likely escalate, along with spirited efforts to arouse support by pinning the blame on individuals who are well-hated by his populist base—like President Obama or Hillary Clinton.

Empathy Deficits. Antisocial personalities are devoid of empathy and compassion. Millon called this “A wide-ranging deficit in social charitability, in human compassion, and in personal remorse and sensitivity.” He added that “many have a seeming disdain for human compassion.” Going forward, Trump’s efforts to display empathy or sustain charitable behaviors will sound and feel much less genuine than his glowing statements about himself or his aggressive attacks on his detractors.

Counterattacks. Millon noted that antisocial personalities are hyper-alert to criticism. He “sees himself as the victim, an indignant bystander subjected to unjust persecution and hostility” feeling “free to counterattack and gain restitution and vindication.” For Trump, the urge to counterattack appears irresistible. He often uses a favorite attack or counterattack strategy among antisocials—projecting their own malicious ideas and behaviors onto others through name-calling and accusations of illegal (or crooked) behavior. Trump’s pattern of lashing out at others will only continue to escalate.

Moral Emptiness. Antisocial personalities have no ethical or moral compass. As Millon described, they “are contemptuous of conventional ethics and values” and “right and wrong are irrelevant abstractions.” Antisocials may feign religiosity—when it suits their purpose. But the moral litmus test will always involve whether they stand to gain from a particular behavior, policy, or government action. For instance, adopting an anti-abortion stance could serve as a calculated strategy, despite having a history of being “very pro-choice.” In all likelihood, no method for Trump to achieve his ends—including separating children from parents—will be morally beneath him.

Clinicians have observed that some individuals with antisocial personalities burn out. Over time, negative family and legal consequences take a toll, prompting antisocials to conform to social and legal expectations. However, as in Trump’s case, when antisocial personalities wield power, burning out is unlikely. Power provides leverage to evade personal responsibility for financial maleficence and sexual indiscretions. Antisocial personalities who have the upper hand will increase their reckless, impulsive, and self-aggrandizing behaviors in an effort to extend their ever-expanding need for power and control. Trump will continue to be drawn toward authoritarian leaders, because they symbolize his interpersonal goal of gaining power and authority over everyone.

Because antisocial personalities don’t change on their own and don’t respond well to interventions, containment is the default management strategy. Without firm, unwavering limits, deception, law-breaking, greed, manipulation, and malevolent behaviors will increase. An antisocial person in a position to self-pardon or self-regulate is a recipe for disaster. Containment must be forceful and uncompromising, because if an antisocial personality locates a crack or loophole, he will exploit it. Staff interventions, comprehensive law enforcement, and judicial systems that mandate accountability must be in place.

Unfortunately, although many Republicans are concerned about Trump’s behaviors, they’re no match for Trump’s populist charisma. Defying Trump is too costly; he can make Republicans pay with electoral consequences and his populist base will pelt defectors with threatening hate mail. Like him or not, Republicans have little motivation for clashing with a powerful leader who promises them judicial appointments and legislative opportunities, the likes of which they’ve not seen in their lifetimes.

Recruiting independent actors to resist Trump is also difficult. Trump skillfully uses intimidation, direct and indirect threats, and offers of power to recruit new supporters who will walk to the microphone, as Brett Kavanaugh did, and speak to the world of Trump’s unprecedented greatness. Exhibiting a glaring lack of judicial independence, Kavanaugh opened his nomination speech with a no holds barred endorsement of Trump’s character, stating, “No president has ever consulted more widely, or talked with more people from more backgrounds, to seek input about a Supreme Court nomination.” Never mind that reflective consultation is anathema to antisocial personalities or that Kavanaugh would have had to review 230 years of Supreme Court nominations to support his statement. Soliciting others to lie for them is a common antisocial strategy. Kavanaugh‘s genuflection to Trump is a foreboding example of how far and deep Trump’s power and influence run.

The Mueller investigation and November blue wave are in danger of being outpaced by Trump’s unmatched speed and skill for playing “games of deception.” Trump’s talent for quickly tweeting divisive messages and propaganda is well-established. Without organized political opposition and a massive public movement for truth, justice, and integrity, Trump will continue winning and most Americans will continue losing.

Even if one or more of these containment strategies succeeds, it’s difficult to envision the American public emerging unscathed. Trump and his followers have shredded civil discourse and elevated division, distrust, and hatred. If he is dethroned, Trump has all but ensured that public conflict over his fall from grace will be painful and violent. Preparation for a Trumpian “call to arms” is necessary.

Coming together to contain a common threat is the best path forward. Trump’s personality and probable future behaviors are inconsistent with American virtues and values and the rule of law. Our youth don’t need a presidential role model who pays off porn stars, locks up children, and locks out the press if they ask him hard questions. For all Americans who crave integrity, honesty, and civil discourse, it’s time to gather together under a large (metaphorical) tent, where all are welcome and respected. We can sort out our differences on climate change, guns, and abortion later. If we don’t come together now—as Mr. Trump himself might say—we’ll soon be facing a huge national and global crisis like no one has ever seen before.