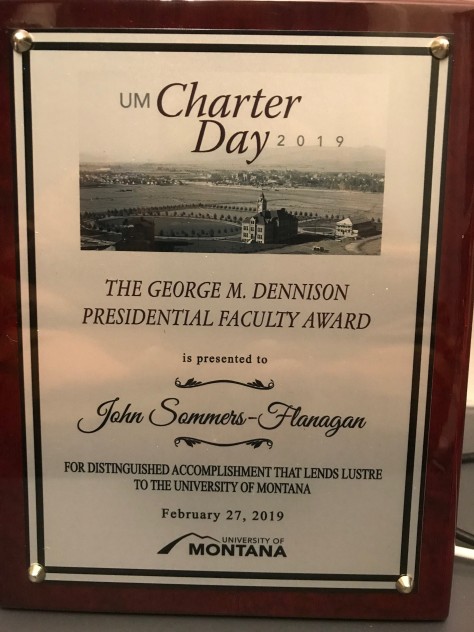 Last Wednesday I received an award on Charter Day at the University of Montana. Getting the award was a big deal and I am humbled and happy. Unfortunately, I couldn’t be at the Charter Day event because I was presenting workshops at the National Association for School Psychologists in Atlanta. Below, is a slightly extended version of the acceptance speech that I video-recorded for the event. I’m fairly certain that the following version is more coherent than the video. What surprised me most about the whole thing (and made me feel silly) is that when I rehearsed this acceptance speech, I couldn’t make it through without crying.

It’s an honor and a privilege to receive the George Dennison Presidential award for distinguished accomplishment at the University of Montana. A big thanks to Roni Johnson my department chair and Adrea Lawrence, dean of the college of education and human sciences, for their nomination.

Back in August, at the State of the University address here at the University of Montana, the theme was about how the college experience transforms lives. To give you a sense of how honored I feel about this award, I want to briefly share with you how my college and graduate school experiences have transformed my life.

I grew up knowing virtually nothing about college, except that it was where you went to play college sports . . . and that was all I wanted to do. After high school, I attended Mount Hood community college in Gresham, Oregon, to play football and baseball. At that point, the only work I had done was manual labor. I had no identity linked to being intellectually capable.

I was a mediocre college student who initially cut corners, fell asleep in class, and was terrified about speaking up in groups. Oddly, my Linebacker coach (who doubled as a ceramics and jewelry making instructor) at Mount Hood was probably the first person who helped me realize I was smart. Very quickly after meeting me he started referring to me as “the rocket scientist.” Seriously, this was the first time in my life that I thought I could do something with my brain, other than slam it into other people.

And then I went on to Oregon State University, to, of course, play football. By then I had begun feeling more comfortable in college; I was building my academic identity. The most important thing is that I had learned how to learn. I remember bragging to my best friend and roommate who was taking a large undergraduate nutrition class with me: “I’ve studied this and I know everything that could possibly be on the exam.” I told him I would be getting a perfect score on the upcoming midterm. I can still feel the experience of the professor personally handing me my paper (in a class of about 75) and whispering, “I never thought anyone would get this score.” This was all new to me. Before, all my peak experiences had to do with sports. After taking human nutrition at Oregon State University, I suddenly had a peak experiential memory related to academics.

Although I had grown more confident about my intellectual ability, I was still very uncomfortable in lecture-type classroom settings. In 4 ½ years of college I only spoke up once during a lecture class, and when I did, the professor shamed me. I felt shy, nervous, and unable to translate thoughts I had in my brain into words and sentences in front of groups. Fortunately, in my small pre-practicum and practicum classes, I had a Native American psychology professor who was amazing, encouraging, and who helped me believe in my counseling skills and abilities.

After getting my undergraduate degree at Oregon State and working a year at a psychiatric hospital, I chose the University of Montana over several other institutions, including the University of Virginia. And then, when I stepped onto campus in the fall of 1981, I found myself. I also found best friends, my wife, and in less than a year had my first publication in a shabby little journal called the New England Journal of Medicine. In a turn of events that I cannot explain, I also found my voice. My anxiety about public speaking went away. In the fall of 1982 I asked to teach Introductory Psychology; I told stories, I made jokes, I danced, and sang in my classes, and I loved it. I found my career home.

Now here I am getting an award named after former UM President George Dennison. Thank you George.

Earlier in my life I had no idea these sorts of awards existed; I never would have imagined being in the running. I never would’ve imagined being able to hang out with cool and smart people like Roni Johnson and Adrea Lawrence. I never would have imagined looking out and seeing the faces of faculty, staff, and administrators here at UM and getting to say that somehow I’ve found myself in this club, in this community, and in this Academy. Before I got here I didn’t even know academies existed. Now, I get to think of you all as friends and colleagues. This is what a college education did for me. I have loved my graduate student and faculty experiences at the University of Montana. I am grateful far beyond what I can express.

I know the words “Thank you” seem very small. I hope you know that I mean them in a very big way.

24 thoughts on “My Acceptance Speech for the George M. Dennison Presidential Faculty Award for Distinguished Accomplishment at the University of Montana”