The Sweet Spot of Self Control (and Anger Management)

The speedometer reads 82 miles per hour. The numbers 8 and 2, represent, to me, a reasonable speed on I-90 in the middle of Montana. Our new (and unnecessary) speed limit signs read eight-zero. So technically, I’m breaking the law by two miles per hour. But the nearest car is a quarter mile away. The road is straight. Having ingested an optimal dose of caffeine, my attention is focused.

Slowly, a car creeps up from behind. He has his cruise control set at 83 mph. He lingers beside me and edges ahead. Then, with only three car lengths between us, he puts on his blinker and pulls in front of me. Now, with no other cars in sight, there’s just me and Mr. 83 mph on I-90, three car lengths apart.

An emotion rises into awareness. It’s almost anger. But nope, it not anger, it’s anger’s close cousin, annoyance. I feel it in my psyche and immediately know it can go in one of three directions: It could sit there and remain itself, until I tire of it; if I feed it, it could rise up and blossom into full-blown anger; or, I can send it away, leaving room for other thoughts and actions.

This is fabulous. This is the Sweet Spot of Self-Control.

Anger is lurking there, I know. I see it peeking over the shoulder of its cousin. “Hello anger,” I say.

In this sweet spot, I experience expanding awareness, a pinch of energy, along with an unfolding of possibilities. I love this place. I love the feelings of strength and power. I also recognize anger’s best buddy, the behavioral impulse. This particular impulse (they vary of course), is itching for me to reset my cruise control to 84 mph.  It’s coming to me in the shape of a desire—a desire to send the driver in front of me a clear message.

“You should cut him off,” the impulse says, “and let him know he should get a clue and give you some space.”

The sweet spot is sweet because it includes the empowered choice to say “No thanks” to the impulse and “See you later” to anger.

Now I’m listening to a different voice in my head. It’s smaller, softer, steadier. “It doesn’t matter” the voice whispers. “Let him creep ahead. Revenge only satisfies briefly.”

I feel a smile on my face as I remember an anger management workshop. With confidence, I had said to the young men in attendance, “No other emotion shifts as quickly as anger. You can go from feeling completely justified and vindicated, but as soon as you act, you can feel overwhelmed with shame and regret.”

A man raised his hand, “Lust” he said. “Lust is just like anger. One second you want it more than anything, but the next second you wish you hadn’t.”

There are many rational reasons why acting on aggressive behavioral impulses is ill-advised. Maybe the biggest is that the man in the car wouldn’t understand my effort to communicate with him. This gap of understanding is common across many efforts to communicate. But it’s especially linked to retaliatory or revenge-filled impulses. When angry, I can’t provide nuance in my communication and make it constructive.

The quiet voice in my brain murmurs: “You’re no victim to your impulses. You drive the car; the car doesn’t drive you.” That doesn’t make much sense. Sometimes the voice in my head speaks in analogy and metaphor. It’s a common problem. I want straight talk, but instead I get some silly metaphor from my elitist and intellectual conscience.

But I do get it and here’s what I get. I get that my conscience is telling me that this sweet spot is sweet because I get to see and feel my self-control. Not only do I get to see my behavioral options, I get to see into the future and evaluate their likely outcomes. I get to reject poor choices and avoid negative outcomes linked to aggressive actions. I’m not a victim of annoyance, anger, or aggressive impulses. I get to make the plan. I get to drive the car.

Now that other driver is far ahead.

Being on a Montana freeway, it’s hard to not think of deer. It’s clear now, but at dusk, deer will be everywhere. They have an odd instinct. Freud and my elitist conscience are inclined to call it a death instinct. Here’s how it works:

When I drive up alongside a deer on the side of the road, it dashes ahead, running alongside me; then it tries to cut across in front of me. This is the coup de gras of bad judgment. I’m in a big metal machine. The deer isn’t. So the deer dies. Not a good choice for the deer.

Yesterday, my phone alerted me to a Youtube speech by an unnamed alt right big-man. I watched and listened. So much smugness I was sick. In the end he shouted out “Hail Trump” and a few others jumped up and gave the “Heil Hitler!” salute.

Like a crazed deer, I felt an instinct. I wanted to drive to D.C. or Whitefish, Montana and find unnamed alt-right man and cut him off with some uncivil discourse. Instead, because I have a frontal lobe, I walked to the gym. Upon arriving, I discovered I’d stepped in dog poop. I’m sure this was an annoying but meaningful metaphor for something. At least that’s what my metaphor-loving conscience suggested. I didn’t buy it. Instead, I muttered “WTF” to myself. Okay, so maybe I muttered “WTF” several times. Then I walked outside in my socks and started cleaning the poop off my shoe. Not an easy task, especially if you’re wearing brand new trail-runners. I had to find a restroom near my office, an old toothbrush, lots of foamy soap, and mindfully scrub away the poop.

I was reminded of something my daughter Rylee once said at age three. She was being carried down a hill and there were many small piles of deer scat. She noticed, commenting: “I didn’t know the poop was so deep.”

But the good news is that I (like you) own a functional frontal lobe that gifts me with the Sweet Spot of Self-Control. Many of us will be mindfully removing the metaphorical shit from our shoes for some time into the future. So let’s make some plans. Not revenge-laced plans; they don’t last. Yes. Let’s pause in the special sweet spot, evaluate our alternatives, and make some excellent plans. 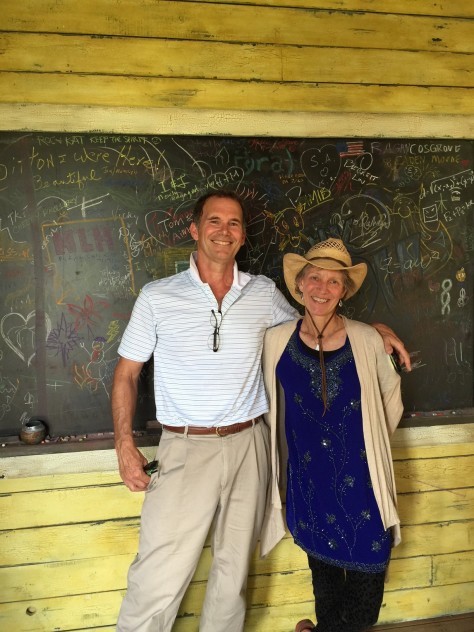 3 thoughts on “The Sweet Spot of Self-Control”